Removing the uterus and both ovaries: pros and cons of hysterectomy and bilateral oophorectomy

Removing the uterus and both ovaries, due to many reasons, are still performed at perimenopausal age and due to many reasons, uterus and ovaries removal are still performed at reproductive age. Hysterectomy with or without salphingooophorectomy is still the most common procedure performed not only in developing countries but also in developed countries. Among of all reasons the most frequent one is to improve the quality of life and prevent future malignancies if the uterus and both ovaries are not removed. Malignancies might probably occur although the incidence rate is very low. When both of the ovaries are removed, estrogen will decrease significantly, this will cause short and long term medical problems and decrease the quality of life. The incidence of coronary heart disease and fractures increases as estrogen decreases. A study performed by Parker et al with some of 10.000 women who underwent total hysterectomy and bilateral salphingooophorectomy at the age of 50 - 54 years old and did not receive HRT, shows that 838 died due to heart disease.1 Other studies reported cognitive disturbances among women who underwent bilateral salphingooophorectomy.2 Further more, the incidence of depression, anxiety and sexual disturbances is higher in women whose ovaries were removed compared to those who underwent natural menopausal state. If both ovaries were removed and then medical problems occured, the next question would be whether the clinician is willing to give HRT or whether the patient is willing to have HRT? In Indonesia, clinicians are afraid of giving HRT and patients are not willing to have HRT. Then what will happen to the patient? Symptomatic medication is then given. One of the reasons of removing both ovaries is to prevent the occurence malignancies of ovary and breast. HRT will increase the incidence of breast cancer. If it is so, then the patient is at the point of no return. If the uterus is removed, will medical problems happen? Yes, there are papillary thyroid cancer found in women whose uterus were removed.3 It shows that uterus also plays important role in controlling thyroid glands. Levi et al. reported an increased risk of epithelial thyroid cancer in women with artificial menopause (OR 6.3%, 95% CI: 1.7 - 23.2).4 Several studies in Europe and USA concluded that hysterectomy will increase the risk of thyroid cancer.5,6 Estrogen indirectly takes part in controlling the release of HRT, if there is no estrogen then HRT release will increase and trigger the growth of thyroid tumor.3 Myometrium and endometrium also have the ability to produce thyroid hormone. The level of iodothyronine deodinase enzyme is high in myometrium and endometrium, especially during pregnancy.7,8 There are 2 types of deodinase enzyme, type 2 and type 3. D2 enzyme transforms T4 to active T3, while D3 transforms T4 to inactive T3.7,8 If uterus is removed, the T3 will decrease and HRT release will be uncontrolled. Estrogen only (+ progesterone) will increase D2 enzyme activity while estrogen + progesterone will increase D3 activity.9 It shows that estrogen plays more important role in increasing D2 enzyme activity. If there is no uterus, then there is no D2 enzyme available. Uterus also has the ability to syntezise prostacycline. Prostacycline has vasodilatation effect, increasing the blood flow to the heart. Women without uterus will have an increased risk of heart disease. Removing the uterus has to be considered carefully. The incidence of malignancies as a consequence of conserving the uterus is lower compared to the adverse effect due to hysterectomy and bilateral salphingooophorectomy. Further study is needed in Indonesia to evaluate the consequences of hysterectomy and bilateral salphingooophorectomy towards thyroid cancer and quality of life in the future. 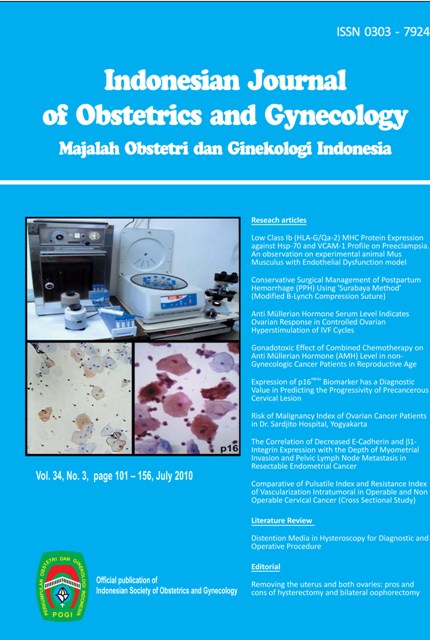